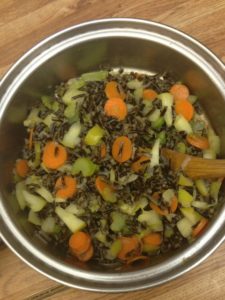 Wild rice is sacred in Native American cultures, and as a member of the Ojigwe nation, I have harvested this rice by canoe on lakes in Minnesota and Wisconsin. Because of its nutritional value and great taste, it is a favorite for entertaining. Cooking wild rice takes a little longer than white rice and it is ore expensive. But this native North American crop is now more available because it is grown throughout the world – including China. Wild rice has more protein than other rice and has 30 times more antioxidants than white rice according to a 2009 study at the University of Minnesota.

One of my friends decided to help in the kitchen while I prepared dinner including my Wild Rice Saute. All was well until it came to sauteing the carrots, celery and shallots. The recipe states coconut oil and my friend wanted canola oil because coconut oil “is bad for you”. Canola oil has never existed in my kitchen and never will. According to the Environmental Working Group, over 90% of the canola grown in North America is genetically modified. Furthermore, there is no such plant as a canola. It is a rape seed oil that has been genetically modified to have fewer toxic fatty acids than rape seed oil. Why is it called canola? CAN = grown in Canada, O = oil, LA = low acid. Putting rape seed oil into processed foods and margarine would not sell but the American public has readily consumed canola oil.

Coconut oil has many nutritional benefits provided from lauric acid. Coconut oil is not a fad and numerous peer-reviewed studies can be found describing its anti-fungal, anti-bacterial, anti-viral affects. Unfortunately, we do not grow coconuts in North America so soy, corn and rape seed oils get the advertising and use in processed foods. Hydrogenated coconut oil in nondairy creamers and toppings are not recommended because processing changes the chemical structure of the fat.

Wild rice has a chewy, nutty flavor and it can be enjoyed with many foods. Any leftovers make a great breakfast.

Combine rice and water in saucepan. Cook over medium heat until tender, about 45 minutes. Meanwhile, saute carrot, celery, shallot, apple and coconut oil in skillet until tender, 3-5 minutes. Drain any water off rice and combine with all ingredients in skillet. Serve hot. Makes 4 servings.