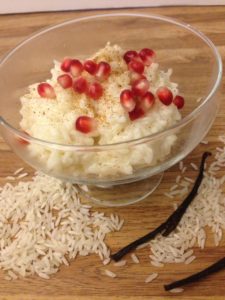 Healthy comfort food is hard to find in the supermarket- especially when you want it tasty, cheap and appealing to everyone. Rice pudding is the ultimate comfort food because it is found on almost every continent wherever rice is available (none was found on Antartica during my month there). Rice cream or pudding has many names- Arroz con leche in Spanish, Risalamande in Scandinavia, Pulut hitam in Malaysia, Riz bi halecb in Lebannon.

But when you make your own from this simple recipe, alternative milk choices need to be carefully selected.

Cow’s milk is one of the big 8 allergens with increasing numbers of people avoiding the highly processed homogenized, pasteurized milk in the dairy case. I remember the days when milk spoiled in a week. Today, you know it is highly processed when the expiration date on the carton is 4 weeks from the day you purchase it.

Soy milk is not a better choice because over 90% of the soybeans grown in the U.S. are genetically modified to withstand Roundup pesticide exposure. There is adequate research to indicate GMO soy products should be avoided. Don’t be fooled by a major brand that has carefully selected wording on their carton to the contrary. There is insufficient non-GMO soybeans grown in the U.S. to produce all the soy milk products available in every supermarket across the nation. Besides, males should tread lightly in their consumption of phytoestrogen products like soy.

The worst choice for making a healthy rice pudding is almond milk. USDA and the California Almond Board have allowed the false advertising and mislabeling of almonds as “raw”. Pasteurized almonds sold as raw almonds or made into almond milk can be toxic. In 2007 it became mandatory to pasteurize almonds because of numerous salmonella foodborne illnesses. The treatment process approved by FDA (Food and Drug Administration) is propylene oxide (PPO). Even the EPA (Environmental Protection Agency) cautions about the neurological effects of PPO that have been observed in animals. Research also indicates PPO has caused tumors in animals and is a probable human carcinogen. Consumption of almonds and almond milk can be a health risk.

The best choice of milk for a healthy rice pudding is coconut milk. It provides a creamy texture and delicate flavor. Don’t worry about the saturated fat content in coconut. It is not a factor in coronary hart disease until the oil is hydrogenated into non-dairy products and toppings.

Yes, supermarkets can be dangerous places but wise consumers can eat healthy by making simple home prepared meals and desserts. You can bring home that extra rice from the Asian restaurant and make it into rice pudding, or chose your favorite rice – jasmine is mine- and make a delightful rice pudding.

Cook milk, rice, honey and salt (+ vanilla bean, if using) in saucepan over medium heat about 30 minutes until rice is soft, stirring frequently. Lower heat to simmer. Cover for 10-15 minutes until rice kernels soften and take up milk. Stir in vanilla extract. Divide into serving dishes. Sprinkle with nutmeg and top with pomegranate seeds or raisins. Makes 4 servings.

Note: For special occasions, soak raisins in rum and serve on top with sprinkle of cinnamon sugar.