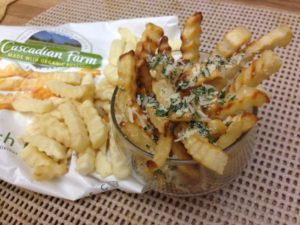 Americans consume too much sodium according to health messages for the past decade yet supermarkets devote increasing shelf space to gourmet salts. Most consumers have little idea which salt to buy or why sodium chloride (salt) is essential to their health. Some even look for iodized salt inaccurately thinking it will be more beneficial.

According to the Salt Institute in Alexandria, Virginia, salt does more than improve the flavor of foods. It reduces bitterness (think broccoli, kale) and enhances sweetness without adding a single calorie (why some people sprinkle salt on watermelon). Salt is one the oldest food seasonings in the world and has preserved foods for thousands of years.

But salt is associated with the increased risk of heart disease and stroke so the Institute of Medicine in 2010 recommended gradually lowering sodium consumption nationwide by decreasing processed foods and beverage content. According to Rachel Adams, Assistant Editor in Food Product Design Fall 2014, “most of the sodium in the food supply is attributed to processed foods and foods prepared in restaurants”.

To successfully reduce salt without giving up the taste, potassium chloride and monosodium glutamate (MSG) have been used in processed meats, frozen meals, seasoning mixes, pickles and soups. However, potassium chloride can produce a negative taste so yeast extracts and soy sauce (another high sodium ingredient) are gaining favor in food processing.

One easy way to control sodium intake is to start with fresh, unprocessed foods and add your own salt to taste. Selecting the most nutritious and ecologically healthy compound can be challenging. Two predominate production methods are used for salt- underground mining and brine evaporation.

During a trip to Peru the evaporation of mineral springs in the Sacred Valley showed the ingenuity of the Inca in producing salt from ponds near Cuzco. Solar energy produced a pure product without any anti-caking agent frequently found in most supermarket brands. Brine salts from northern European areas – like Celtic Sea Salt- contain trace minerals- chromium, zinc, vanadium, boron, and a small amount of iodine. This salt should dull grey, not be white like most salts sold in the supermarket.

Pakistan is the primary source of Himalayan salt which comes from an ancient ocean buried when the India subcontinent collided into the Asian landmass. Himalayan salt comes in pink and white crystaline colors according to Mark Bitterman in Salt Block Cooking. He provides photos of the labor intense mining of the salt since each layer of white, pink and red are separated to produce different grinds of salt. Pink has more iron than the white Himalayan salt.

Black salt is a unique unrefined mineral salt from volcanic areas of India and Hawaii. It has a sulfur taste and is highly prized in Ayurvedic medicine for digestive disorders. It has the lowest sodium content of commercially available products.

Different salts have a different stimulation on the tongue. Place a small amount in the center of your tongue to decide which you like best and avoid those with undisclosed anti-caking agents that can range from aluminosilicate to tricalcium phosphate. Canada allows aluminum silicate, calcium stearate, cellulose and silicon dioxide (quartz) as anti-caking agents.

My favorite use of sea salt is Bistro Fries. These are healthier than the local fast food restaurant and easy to fix. The iodine issue of salt will be addressed in a future column.