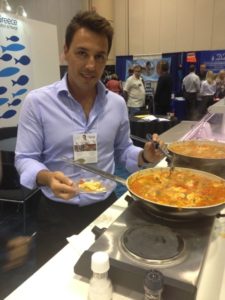 Thousands of restaurant and foodservice personnel were treated to healthy choices at the recent Florida Restaurant and Lodging Show. Sustainability was the buzz word in many seafood exhibits and the emphasis on the Mediterranean diet featuring fresh vegetables, olive oil and fish was hard to miss.

European organic Sea Bream from Greece was the highlight of the show. Mediterranean producers abide by the European Union’s strict quality and freshness specifications stating that the farmed fish food is formulated with certified organic foodstuffs without additives, antibiotics or chemicals. Sea Bream has the nutritional advantage of high omega 3 fatty acids for brain, eyes, and cellular health over farm raised fish fed soy and corn pellets.

Canadian cultured mussels grown on ropes were another tasty nutritious food featured from Prince Edward Island, Nova Scotia and Newfoundland. The versatility of mussels as a lean protein, low calorie food was on display with some steamed in wine while others were sauteed in curries or Italian pasta sauce.

Farmed alligator was a disappointment when the salesman stated the meat came from Louisiana where they are fed soy and corn. Alligator tail fillet needs to be pre-tenderized before using in chowders or breaded alligator tenders. Thee meat sampled came from an 11 to 15 month old alligator and still required lots of chewing before swallowing.

Florida Aquaculture Foundation provided the best slogans of the exhibition, ” Friends Don’t Let Friends Eat Imported Shrimp”, and “Say No To Drugs- Don’t Eat Imported Shrimp”. The farm raised shrimp featured are raised in Fellsmire, FL in re-circulating water systems free from chemicals and preservatives that are found in other shrimp farms around the world. Be sure to ask where the shrimp comes from the next time you enjoy America’s favorite seafood.

When purchasing farm-raised seafood, be an informed consumer. Support fish farms that do not pollute the environment and do not feed their livestock soy and corn. Request European Organic Sea Bream or Sea Bass so you can enjoy this delightful recipe prepared during the show. You can substitute grouper or snapper if Sea Bream is not available.