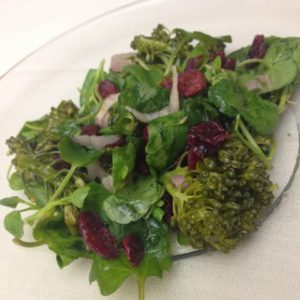 Despite how North Americans may classify them, weeds like watercress can be healthy and can offer medicinal properties. In fact, watercress is listed as an aphrodisiac in Dioscorides’ De Materia Medica from 77 A.D. Ancient Egyptians knew its benefits before it spread to Europe and Asia.

According to Food Plants of the World by Ben-Erik van Wyk, Persians, Greeks and Romans used watercress as a medicine, eating the leaves raw in salads and on sandwiches. Asian recipes often add watercress to soups and sautes.

Young watercress leaves and stems have a piquant, somewhat peppery flavor that adds zest to the rich complement of vitamins and minerals: vitamin C, folate, magnesium and iron. It is the best vegetable source of omega-3 fatty acids for reducing inflammation.

Watercress’ medicinal uses have expanded through the years. Ancient cultures employed it as a digestive stimulant and tonic, as well as an anemia remedy. Externally, Matthew Biggs, Jekka McVicar and Bob Flowerdew write in Vegetables, Herbs & Fruit, it served as a hair tonic and was used on skin to remove rashes. Poultices of watercress were used to heal glandular tumors and lymphatic swelling.

Current research is focused on the antiangiogenic cancer-suppressing properties found in this relative of the radish. Watercress’ isothiocyanate compounds make it an excellent plant for juicing by people who want to minimize abnormal cell growth.

To purchase watercress, look in the produce section for a sealed plastic bag with a hydroponically grown cluster of stems and leaves.

You can snip off just enough for mixing into yogurt to serve over grilled salmon.

Or enjoy this vegetable, which has more vitamin K (250mcg in about 3 1/2 ounces) than broccoli (205mcg) and green cabbage (145mcg), according to the U.S. Department of Agriculture database, as I do, in a watercress salad that tantalizes the taste buds.